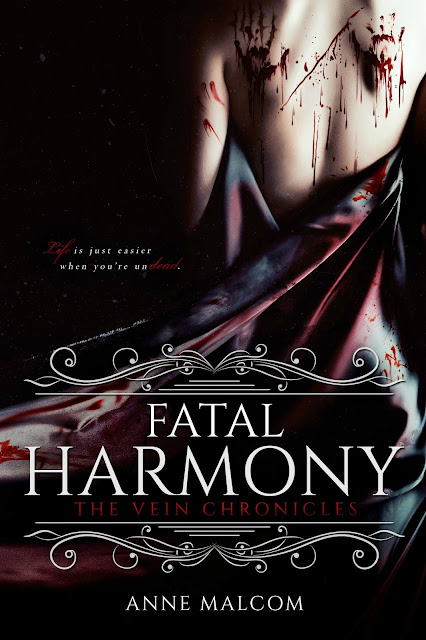 Title: Fatal Harmony
Series: The Vein Chronicles #1
Author: Anne Malcom
Genre: Paranormal Romance
Release Date: January 31, 2017
Blurb
I may be the villain of the story, but at least I get a leading role.
Evil is a term thrown around history and literature as if it’s something so easily definable. A concept to fight against.
Evil doesn’t exist.
Neither does ‘good.’
Vampires do, though.
I just happen to be one.
I’ve cruised through the centuries managing to avoid all the wars, supernatural and human, but still going to all the best parties.
I would say I avoided bloodshed, but it’s kind of part of the whole ‘vampire’ thing.
I’ve lived on the fringes of a society that considered cruelty and sadism favorable character traits for almost five hundred years. Now I’m in the middle of a war that might just put my nonbeating heart in a lot of danger.
Battles, I can handle.
The impossible attraction between me and the vampire slayer, not to mention the penetrating gaze of the king of our race, on the other hand?
I might not get out undead.
ADD TO GOODREADS 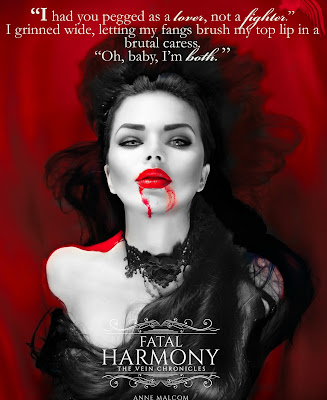 Fatal Harmony by Anne Malcom
My rating: 4 of 5 stars

I was quite excited to get my hands on a new vampire book. Good paranormal romance is hard to find and I’m quite picky.

Anne Malcom has not only succeeded in writing a very good book but an amazing female protagonist as well. Kudos to her! In the paranormal genre, we are so used to the alpha males ruling it all, that it is a refreshing change to read about a female that literally kicks ass. I loved how the world was build and Malcom’s back-story of vampires’ origin. Anne Malcom’s vampires are something we’ve never seen before, definitely a fresh taste of new blood in the genre.

Isla is a loner, five hundred years on earth have taught her that she can trust no one but herself. She’s a vampire rebel, breaking almost all the rules and she certainly doesn’t give a shit about ancient vampire etiquettes. Although she should as she belongs to one of the greatest vampire families, their Vein Line descending straight from the gods.

With all the supernatural creatures roaming the earth, vampires are on the top of the food chain. Their only real enemy being the slayers, an anomaly in the human race, people that are born to kill vampires. And one of those people is Thorne, leader of New York slayer faction.

Isla is threatened by her own family and because of her antics and she’s the constant target of murder attempts by other vampires. And so is her king, who stands in the way of the human enslavement planned by underworld rebellion. Throw in Thorne with his merry slayer companions and the hell is ready to break loose.

How can you trust your eternal enemy? Will you fight for the regime you’ve never believed in? Are you able to feel love again? Who or what is worthy of risking your life for? Follow the trail of blood and you’ll find out… well sort of, because the story ends in a cliffhanger.

As said, I loved the Malcom’s world of vampires and other mythical creatures. She can write witty dialogues and emotion-filled scenes that vary from thrilling action to chilling suspense and steamy sex. The book has quite a few scenes that take the reader by surprise and I’d love to say, that there’s never a dull moment…except there was, in my opinion anyway. I mean the repetition of the king’s muscled neck, Isla’s hate for her family and their hate for her, the detailed description of her wardrobe, apartment, attitude… Had the story been tighter and the flow better, it would have been five stars. Now it’s four and I can’t wait to read how the story continues. 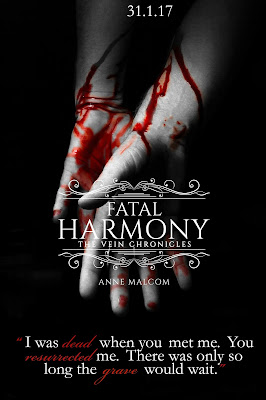 Author Bio
Anne Malcom has been an avid reader since before she can remember, her mother responsible for her book addiction. It started with magical journeys into the world of Hogwarts and Middle Earth; then as she grew up her reading tastes grew with her. Her obsession with books and romance novels in particular gave Anne the opportunity to find another passion, writing. Finding writing about alpha males and happily ever afters more fun than reading about them, Anne is not about to stop any time soon.Raised in small town New Zealand, Anne had a truly special childhood, growing up in one of the most beautiful countries in the world. She has backpacked across Europe, ridden camels in the Sahara, eaten her way through Italy, and had all sorts of crazy adventures. For now, she’s back at home in New Zealand and quite happy. But who knows when the travel bug will bite her again?
Author Links
WEBSITE
FACEBOOK
GOODREADS 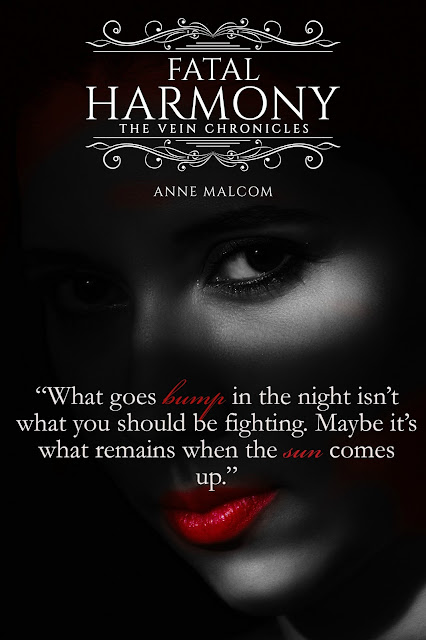